The history of Duathlon : 7 Classic victories

In a sport that is still so young and which doesn't benefit from the coverage or funding of the Olympic sport of Triathlon it's vital that we remember and record the history of Duathlon which is being written every day.

Here's my pick of some classic victories from the early 'noughties', highlighting great athletes who wrote their names indelibly in Duathlon's growing and glowing history

The 2003 worlds were being billed as the hardest ever with the course zig-zagging its way up and down the Mountainous valley sides stretching their way out of the idyllic Swiss town of Affoltern. The womens’ race in particular was being billed as a clash of the bikers and with the likes of France’s Edwige Pitel, Switzerland’s Karin Thurig and Britain’s Vicki Pincombe all close as they headed out onto the bike leg there began a series of vicious attacks and counter attacks in the pouring rain which had rendered the course a virtual skidpan. Pitel and Thurig, having distanced Pincombe both tried in turn to drop each other but to no avail. Exiting T2 Pitel appeared to deliberately ease slightly and allow Thurig to surge in an attempt to drop her. No sooner had she done this than Thurig began to suffer a number of painful cramps over the final run as Pitel kicked away to victory before later admitting that she had seen Thurig cramping towards the end of the bike leg and it was then that she had hatched her plan. Interestingly both have now forged careers in pro cycling. Thurig has been double world time trial champion and Pitel remains one of the world’s oldest professionals at the age of 42. Those who watched the European championships around the ever twisting and meandering dock side will remember the Mens’ winner Jurgen Dereere of Belgium as the king of the surge.  Coming off the draft legal bike leg which had made its way up and down the seafront stretching out to things were still predictably close. Dereere set about using the twisty and narrow quay-side run to his advantage by repeatedly surging out of the corners and turn points and visibly easing back to recover having done so.  It was a tactic that ’s Tim Don and the Netheland’s Armand Van Der Smissen couldn’t quite live with. Were it not for his countryman, the late Benny Vansteelant,  Dereere might have added many more illustrious titles to his name and so it was on the cobbled quayside of that in Vansteelant’s absence Dereere used his relentless surging to take his place Duathlon’s history books. 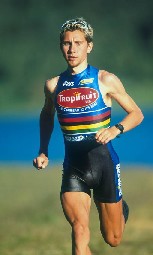 The 2005 World long course championships will be remembered as the day when Benny Vansteelant confirmed his undeniable status as the greatest Duathlete of all time. His performance on the day resembled more closely a ritual humiliation of the competition and his tactics simply confirmed what many had thought for some time –he only had one: Go harder than anyone else for the entire race.  By the end of the first run he was alone and out onto the 80k bike leg he simply continued to ride away from the chasing pack to build a 10 minute lead going into the final run. Such was his regal superiority that he spent much of the first half of the final 11k run waving to the crowd and hand-slapping as he cruised along before turning on the afterburners to finish still 5 minutes ahead of Marcel Zamora of Spain in 2nd place. Benny’s death following a road traffic accident in 2007 robbed the sport of not just its greatest ever champion with 9 world titles to his name but of a likable character with a smile that transcended sport.

No Duathlon roll call would be complete without the greatest Duathlete of all time, the late Benny Vansteelant. The Dutch round of the Powerman world cup illustrated perfectly what many had thought for some time –he only had one tactic: Go harder than anyone else for the entire race. And it worked!  By the end of the first run he was alone and out onto the 75k bike leg he simply continued to ride away from the chasing pack to build an unassailable lead. At the age of 25 Vansteelent had already won 3 world championships of the 9 that he would win go on to before his untimely death following an accident while out cycling. The sport was robbed of not just its greatest ever champion but an infectiously effervescent character with a smile that became the sport’s iconic image. The seafront in the Italian coastal resort of can claim, alongside Geel in to be one of Duathlon’s spiritual homes having been host to multiple World and European championships. The 2006 event saw a much anticipated showdown between the World’s finest female Duathletes and the hottest new prospect in women’s Triathlon, Vanessa Fernandes of .  By September that year she had already won 7 Triathlon world cups in one season.  Amazingly, she hadn’t competed in Duathlon at a world level since winning the junior World title in 2003 and after the results she had already achieved that year she could have been forgiven for ‘sitting in’ in the pack and looking to take control on the final run. Instead, in what was remarked by many as being a ‘Benny-esque’ performance she set about demolishing the field from start to finish to hold a two minute buffer over Spanish Olympian Ana who finished 2nd.

Having won Silver Medals in both World long and short course Duathlon championships in 2005 and 2006 the tough Scottish athlete had stamped her mark as one of the Worlds finest Duathletes.  By June the 16th 2007 Morrison already had one eye on an eventual switch to long distance triathlon and the Ironman circuit (where she is now flourishing) and at the foot of Arthur’s seat with a home crowd baying for Morrison to take the title under the leaden skies and intermittent rain she lined up with the heavy weight of expectation on her shoulders. By the end of the first run she was comfortably away In a lead group of 4 but it was on the second accent of the brutal Arthur’s seat that Morrison moved into a solo lead. Local knowledge of the tricky climb and decent will no doubt have helped her but anyone who was there will surely never forget the entirely partisan crowd draped in sodden macs cheering for her to bring the title home as she rounded the corner by Holyrood Palace for the last time.

It seems entirely fitting that our 7th pick of classic Duathlon wins should bring us full circle. The summer of 2008 saw a brand new world cup on the ITU calendar and it was held in the fairly ordinary Belgian town of . Nothing out of the ordinary seems to happen there. It’s no different to any other small Belgian town really.  Except, that is, for the fact that it is home to the Vansteelant family and seemingly every living inhabitant is a member of the Vansteelant fan club along with all their relatives and pets. During his years of world domination Benny Vansteelant had a band (in the musical sense) of supporters who came and banged drums and blew trumpets with ‘Benny’ painted across their foreheads and so it was that on the day of the anniversary race to mark Benny’s sad passing the stage was set around the tight town centre course for his younger brother Joerie who was already a world champion himself by this stage to win what was probably the most emotional race of his life. That’s not to say that he was gifted anything. With world cup points and substantial prize money up for grabs he was pushed all the way to a tearful victory.