Jez:
"I have been so blessed to live a massively enriched life through sport and it gives me great pleasure to share a bit of that journey with you here.
I stopped racing in 2014 having started in 1992 and was lucky enough to carve out a long career as a sportsman which has saw me race as a professional, win 81 races and become British number one."

I started my sporting life as a 13 year old racing Cyclo-Cross in West London and went on to become an Elite road cyclist racing cyclist competing across Europe and occasionally further. In 2003 I had a change of direction and began racing Duathlon and with a lot of hard work and many blessings I went on to become the UK number 1 ranked Duathlete and along the way have won more Duathlons than any other athlete in the history of the sport worldwide.

None of these opportunities would have been possible without some very important people in my life.
They are: Graham MacNamee, Tilman Marsh, my lovely Mum, Jamie Pringle, Peter Dymoke, Pete Swettenham
Leda Ray ,Tom Rowan, Matt Brown and Jesus.
( just not necessarily in that order! ) 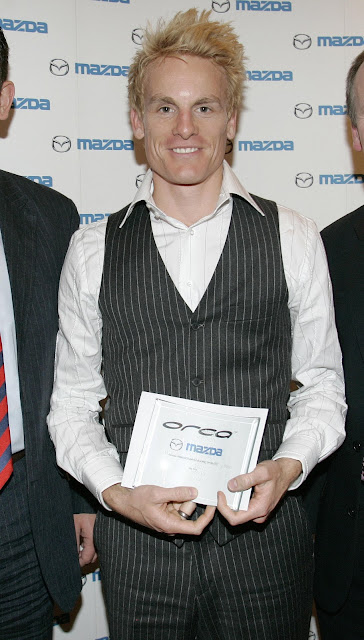 Receiving the award as Britain's number 1 Duathlete in 2007
I would like to take this chance to thank all the sponsors made my racing career in possible. Foremost of these are
Bike and Run London
and Maxifuel
who sponsored me from 2000 until 2014 starting when they were just a tiny Maximuscle shop in Watford.
I would also like to thank my other incredibly generous sponsors that have supported me along the way since 1994:
Muddy Fox Teamworks / Fred SalmonEvans CyclesOakley UKTechnofuelHillingdon Council Sports Development GrantsJoe BowlesBianchiMaximuscleMaxifuelReebokAviaPlanet XCEP CompressionSport Beans UK / Best ImportsBike and Run LondonFisher Outdoor LeisureTrek UKBontrager
Email ThisBlogThis!Share to TwitterShare to FacebookShare to Pinterest
Home
Subscribe to: Posts (Atom)